In 1963-1996, Zielona Góra was the site of two cyclical nationwide exhibitions which, though well described, still serve as a kind of myth, supporting the quest for for a local, postwar identity. The Golden Grape Exhibitions and Symposiums (1963-1981) and the Biennale of New Art (1985-1996) became landmarks of local art history, but also historical events whose meanings continue to be researched, renegotiated, and reconstructed.

Can their specificity provide today a starting point for a topical discussion about the culture field, its active and overlooked participants, and the utopias accompanying them? Why should we return to those ideas after almost twenty five years?

A lot has changed during this time. Poland is part of the European Union, the Polish art world is (to a degree at least) part of the global one. In this context, issues of ongoing modernization, cultural change, or new urban aesthetics remain interesting. What has happened over the last twenty years, has art found its place in social life or does it continue to dwell in the enclaves of institutions and academia? Can we speak of certain under-researched, ill-understood facts, disregarded protagonists, unacknowledged events? In Zielona Góra, a city that once wanted the visual arts to serve as a basis of its cultural scene, such questions can resound more distinctly. The universalization of global problems in a conscious localness will be the main goal of our exhibition and its accompanying events.

In late 2019, when we started working on the Biennale, reality looked different than today. A lead theme of „Returning to the Past” was then proposed as an attempt to rethink the artistic experiences of the Golden Grape Exhibitions and Symposiums and the Biennale of New Art in Zielona Góra. We have decided to stick with it despite all the things that have meanwhile changed. Originally, the exhibition was to consist of a number of micro-narratives relating to the identities of the city, the region, and its art institutions. The proposed title stemmed from a desire to confront questions about the shape of the future in the context of seemingly utopian urban-planning concepts of the 1960s and 1970s and of artistic practices that already half a century ago provided reflection on the invasive effect of human activities on the ecosystem. In spring, we reviewed and updated some of the initial assumptions.

In March, the pandemic broke out, and work on the exhibition receded into the background. Successive countries announced they were closing their borders. It soon became clear that the most vulnerable and unprotected social groups would be hardest hit by the virus. At the same time, an impending economic crisis of impossible to predict consequences is already heralding an even great polarization of class distinctions.

Within a short time since the pandemic became global, we have witnessed mass protests in the defence of minority rights, the toppling of the monuments of colonial heroes, a growing awareness of the significance of climate change, and a globally felt need to fulfil the fundamental postulate of modernity, that is an equality among people regardless of their individual characteristics. All that meant that in mid-June we decided to partly revise the original concept of the Biennale. We wanted to respond to the recent events, even if we are aware of the limited role of art and the exhibition medium when compared with the scale of the issues at hand.

Our Biennale will take place in late autumn, at the turn of October and November. Traditionally in Polish culture, this is a time of acknowledging and remembering our ancestors, of listening to their stories and complaints. Yes, we are heading towards the future – but not without our dead.

Since the onset of the pandemic, we have been aware that the Biennale may have to be carried out online. This is something we would very much like to avoid. The months of lockdown have made us crave presence, contact, meetings. Consequently, we are planning a physical version of the exhibition, which is to open on 15 October. We hope that it works out. That this autumn we can meet in Zielona Góra, attend the planned symposium, exhibitions, performances, public programme. That we are to examine works from up close, sit next to each other, talk about what is going on. 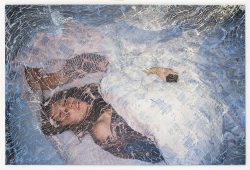 Here and there. A short essay on glocality. 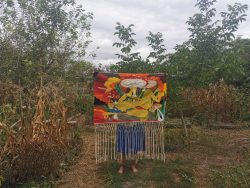 @ARTS OF THE WORKING CLASS

This year’s iteration ‘Returning to the Future’ offers a vision of new social spaces through discussions, performances and a virtual exhibition guide.